What My Great Aunt Taught Me About Sisterhood by Rebecca Adams 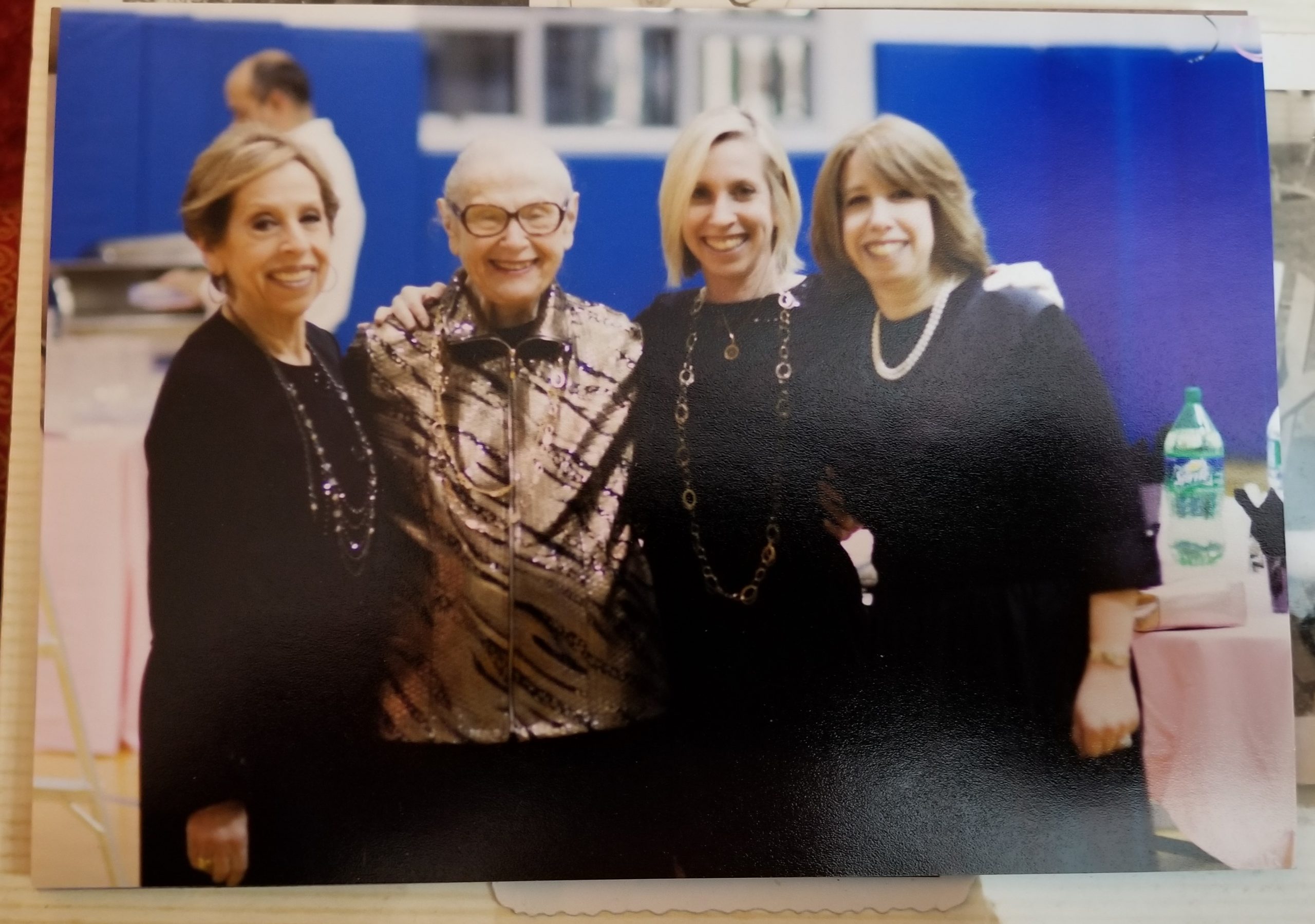 My granddaughter wrote a wonderful piece for The Huffington Post where she is the Family & Relationships writer (why not brag) that was so poignant that I thought I would share it with you. It’s about sisterhood – something deeply important to me. In fact, David York Agency is founded on sisterhood. You see, I started this agency with my sister, Ruth, in 1985. We were inseparable until the very end.

It wasn’t until I took the shovel in my hands and scooped up wet dirt myself that I realized how powerful the Jewish burial tradition of chesed shel emet is. In Judaism, burying a loved one is the last gift you can give them, and there’s no expectation that that gift will be returned. I performed this symbolic act when my great – aunt, Aunt Ruthie, died recently. I’d never realized how heavy dirt could be, especially as rain pours down like it was that day in the cemetery. The thick mud had caked onto my boots as I trudged to her graveside. My Bubbie, her sister, joked that it was a funeral Ruthie would never have gone to herself — too cold, too rainy, too far.
But my Bubbie had spent her whole life alongside Ruthie, and she was going to be with her sister until the last moment possible. Ten and a half years older, Ruthie had always said that my Bubbie was a gift. When they were grown up and were both married, they moved into a two-family home in Far Rockaway so that they could raise their children together. They received their nursing degrees in the ’70s and opened up a home healthcare business as founding partners shortly after, working side-by-side each day until Ruthie was well into her 80s. For the last few years of her life, Ruthie and my Bubbie lived next door to one another again. They barely had to walk three feet to see each other. 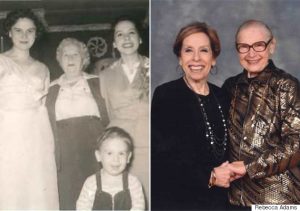 Left photo: Ruthie (left), their grandmother (the original Bubbie of the family), Ruthie’s son and my Bubbie (right). Right photo: My Bubbie (left) and Ruthie (right).

Life was kind to them — they traveled abroad together, spent summers at beach clubs and laughed over weekly Friday night family dinners. But there were also curveballs. When my Bubbie was 45 years old, my grandfather passed away, leaving her scrambling to raise four kids on her own. Ruthie was always around to help — though she too became a widow of sorts when her beloved ex-husband passed away three years later. Their husbands had been taken from them, but they had each other. Bubbie always called Ruthie her “soulmate.” As I dug the shovel into the mound of dirt at Ruthie’s burial, the pain I felt was not for my late great-aunt, who led a long, fulfilling life surrounded by people who loved her. The pain I felt was for my Bubbie, who now has to live out the rest of her days without her sister.

Living With My Bubbie

I spent a good portion of my early adulthood living with my Bubbie during Ruthie’s last years. No matter how deep Ruthie’s dementia had set in or how many simple facts she could no longer remember, Bubbie would always send me to fetch Ruthie to join us for dinner. The two sisters could still reminisce about their childhood or talk about Old Hollywood gossip. They’d explain to me how Grace Kelly “slept with every single co-star” or how Fred Astaire didn’t like to appear in films with Eleanor Powell. “He was threatened by her talent,” Ruthie would say. It was a privilege to witness those last few years when Bubbie’s patience with her sister was tested. Even if she had spent the preceding 20 minutes frustrated by how labored conversations with Ruthie had become in old age, a simple facial expression or tone of voice from Ruthie could make both sisters crack up. They practically spoke their own language. 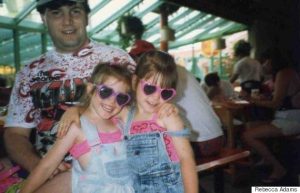 Me (left) with my sister Claire (right) circa the last time acid wash overalls were fashionable.

This was the model for sisterhood that I’ve had during my life, one of unwavering loyalty and devotion. I also grew up with one sibling, a sister named Claire who has been my best friend from the day I was born, just 20 months after her birth. Between year s of inside jokes and moving across the country together, we also have our own language. Only I know when she’s injecting a ’90s movie quote into conversation in her deadpan expression; only she knows when I need her to come in closer, even when I tell her I need to be alone.

The Power of a Sister

No one can get on my nerves or hurt me quite like my sister can. That’s the kind of power I only give to Claire. But my great-aunt taught me that the power one sister holds over the other should be wielded carefully, especially when there are just two of you. Ruthie wasn’t always the easiest person to deal with — at times, she could be insensitive or purposely contrarian — but she knew my Bubbie’s ticks well enough that she’d never let it go too far. When it came to their fights, the stakes were always low. She and my Bubbie would drive each other nuts and be back to laughing in a matter of minutes.
In the same way, my sister is so adept at getting under my skin, because she’s one of the few people who can inhabit it. The empathy Claire has shown me is the kind I can’t imagine existing in any other type of bond. She gets me, just like Ruthie understood my Bubbie. But I still know there have been too many times when pride and anger let a fight go on for too long, or I didn’t listen closely enough to the subtext of Claire’s words to understand that she needed me to come in closer, rather than leave her alone. 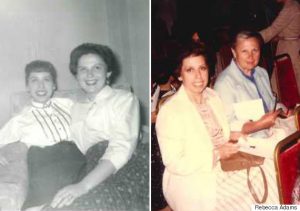 My Bubbie Anita Kamiel (left in both photos) with her sister, Ruth Strand (right).

Once I put down the shovel at Ruthie’s funeral, I stood under an umbrella with my sister. I saw my Bubbie, huddled with her children, watching as more wet earth separated her from the wooden box in which her sister lay. It was as if the dirt we were shoveling was scooped out from inside Bubbie’s body to cover Ruthie. A lost sister is a void that cannot be filled — you can’t replace a soulmate. As the rain beat down on us in the cemetery, I clutched Claire’s hand, desperately hoping that the day it was no longer there would never come. I hoped that if I squeezed tightly enough, the universe would make an exception for us. But Ruthie forced me to confront the fact that death makes no exceptions for sisters, no matter how tightly they cling to one another throughout life.

We buried Ruthie as a family that day. Even though shoveling dirt onto a deceased loved one is meant to be selfless, I felt as if she gave me something she could never have given me in life. She reminded me that, when it comes to my sister, I need to keep the stakes low and reach for her hand while I still can. The memory of these things are all we’ll have in the end
Categories: Newsletter, Senior CareBy David York AgencyDecember 6, 2017
Share this post
Share on FacebookShare on Facebook TweetShare on Twitter Share on LinkedInShare on LinkedIn